How to be Prepared for Anything – the Olympian way

In the last days before competition there is normally lots of talk in the media about final preparations. What are the athletes, swimmers, rowers, hockey players, boxers doing in the final days?

I can only talk from personal experience about what I, we in the men’s rowing 8, were doing in 2000 and in essence we were looking to do the same as we’d tried to do for the previous two years. Except it wasn’t that easy.

We arrived in Sydney about 5 days before our first race and what had changed was that we were in a new environment. A weird, awesome, busy environment where we were surrounded by other sports men and women, who were all different sizes and shapes. Some of whom were wearing the same kit as us and therefore were clearly on our team, yet we’d never met them before. Most of the athletes weren’t on our team, some were world famous and some were completely unknown, some were from the richest countries in the world and some were from the poorest – It was, and still is a very unusual environment.

The second significant difference for the team and I, was that our competitors were around, living in the same village, eating in the same dining hall and training on the same lake as us – so we were very aware of the image we hoped to portray to them. The third key difference, was that the media were vaguely interested in us. But, the same as it had ever been, we were still trying to row better and more effectively than we had done before.

While we were doing less training in the final days before our race, no land training and not many miles on the water, we were still focusing on the same things that we’d spent years trying to improve, our boat speed.

We’d spent a long time working on how we moved our hands, our backs, our legs, how we communicated together, whose opinions were of value, how to bounce back when things went wrong, how to continue to build our momentum, how to continue to learn from each other, how to use our Bull***t filters and how to be clinically focused on our performance.

In the final days we had to continue to focus on, and control, the things that we could control. Racing is in so many ways the same as training. Yes, we let ourselves feel more pressure and the environment is very different, but it is still rowing, the intensity goes up, but we had worked hard to train the way we wanted to race, to maintain the focus the drive and energy every day, not just for the last week. In the last week we were still making changes, but they weren’t new things, they were just part of the improvement process that we’d been working on. They were small refinements to the skills we’d worked on for years to improve and develop.

Be as good as you can be

The other day I was listening to a programme on Radio 5 live, ‘Victoria Pendleton’s Mind of a Cyclist’, what struck me was that Victoria, Chris Hoy and Bradley Wiggins all had a similar view of training and preparation. They all worked incredible hard every single day to do their best. To be as good as they could be. Day in day out. Each and every day they focused on excellence.

Whether it be the day of an Olympic final, a stage of the Tour de France or a day training in the middle of winter. How do you treat each day? Tomorrow when you get out of bed, when you arrive in at work, will you make a decision to be as good as you can be? That you will deal with whatever comes along as well as you can? Or are you saving yourself, your best days for the ‘big day’. My view is that if we save ourselves for the ‘big day’ when it comes along we won’t be as good as we could have been. Relying on a last few hours or days of preparation is not enough. Yes, we can continue to learn and improve in the last days, but on the ‘big day’ we all need to rely on the months and years of hard work, on the habits that we have built and honed.

It will be great to be back in an Olympic environment this month, to be surrounded by people who have absolute clarity and a focus on performance. I’m looking forward to learning as much as I can, lessons that we can all apply to being as good as we can be every day in business.

The Will It Make The Boat Go Faster? Performance Principles and Preparation

Ben’s good preparation techniques included focusing on their goal, focusing on performance and how the crew would work most effectively together as a team. In the last weeks before the race, the team continued to focus and deliver on the good habits they had built, adjusting to the changes in their circumstance by controlling the things they were still able to control and being as good as they can be every day, to be even better on their big day. 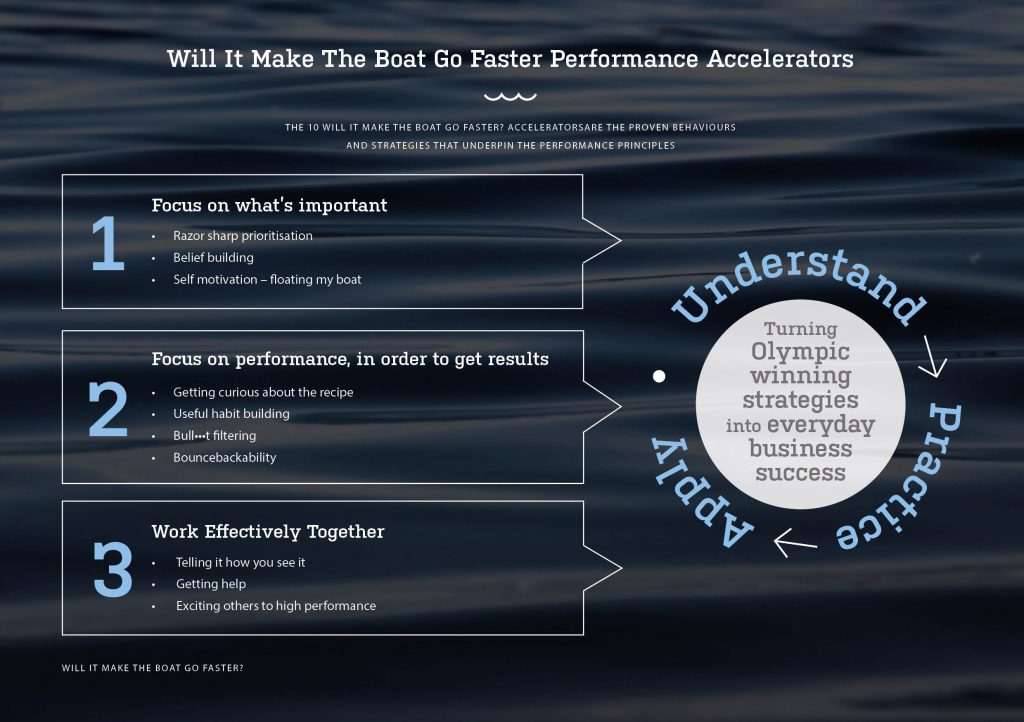