The Story
Behind the Name

Ben Hunt-Davis was part of an underachieving Men’s Eight who in 1998 set themselves a Crazy Goal of winning an Olympic Gold Medal in just two years time.

They developed a whole new way of working and began challenging everything they did with the question: “Will It Make The Boat Go Faster?” If it did, they would keep doing it, if it didn’t they’d try something different.

By focusing on their performance, their results started improving, giving them the belief that their Crazy Goal may not be so crazy after all.

On the 25th September 2000, Ben and his crew won Gold at the Sydney Olympics. Now their story acts as a reminder that with the right approach people are capable of amazing things. When Ben met fellow leadership consultant Harriet Beveridge it didn’t take long for them to realise the power of Ben’s story. There were immense parallels between the businesses they were working with and the techniques Ben’s crew used to improve their performance.

In 2011, they released their now bestselling book “Will It Make The Boat Go Faster?” so that anyone looking to improve their performance at work, in sport or simply in life can learn the dependable Olympic winning strategies that have been proven at the highest levels of sport. 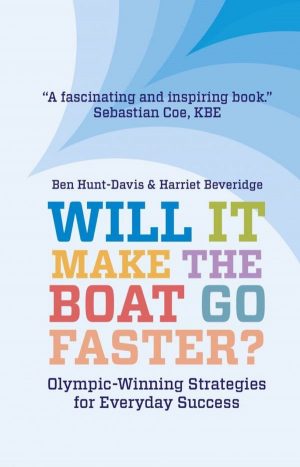 Personally Signed by the Author
The Book
by Ben Hunt-Davis MBE & Harriet Beveridge
£12.99
After many years of not winning any races at all, Ben Hunt-Davis and the GB Men's Rowing Eight won gold at the Sydney Olympics in 2000. They changed the way they worked, which changed the results they got.
Get Yours Today
2012

In 2012 co-founders Tom Barry and Ben Hunt-Davis launched Will It Make The Boat Go Faster? the performance consultancy.

Determined to live and breathe all that we teach our clients, the consultancy is the embodiment of our performance principles, behaviours and strategies that delivered Ben an Olympic gold medal.

All of these success factors are brought to life through a number of different interventions or programmes which are designed to drive real change over time. This means establishing a true performance culture, united under a motivating, inspiring goal or vision. With everyone clear on what’s in it for them, and how they can be most successful in their roles.

Proven at the highest level of sport and business. We help:

We'd love to discuss how we can make your boat go faster, get in touch so we can help you find the right solution
Get In Touch